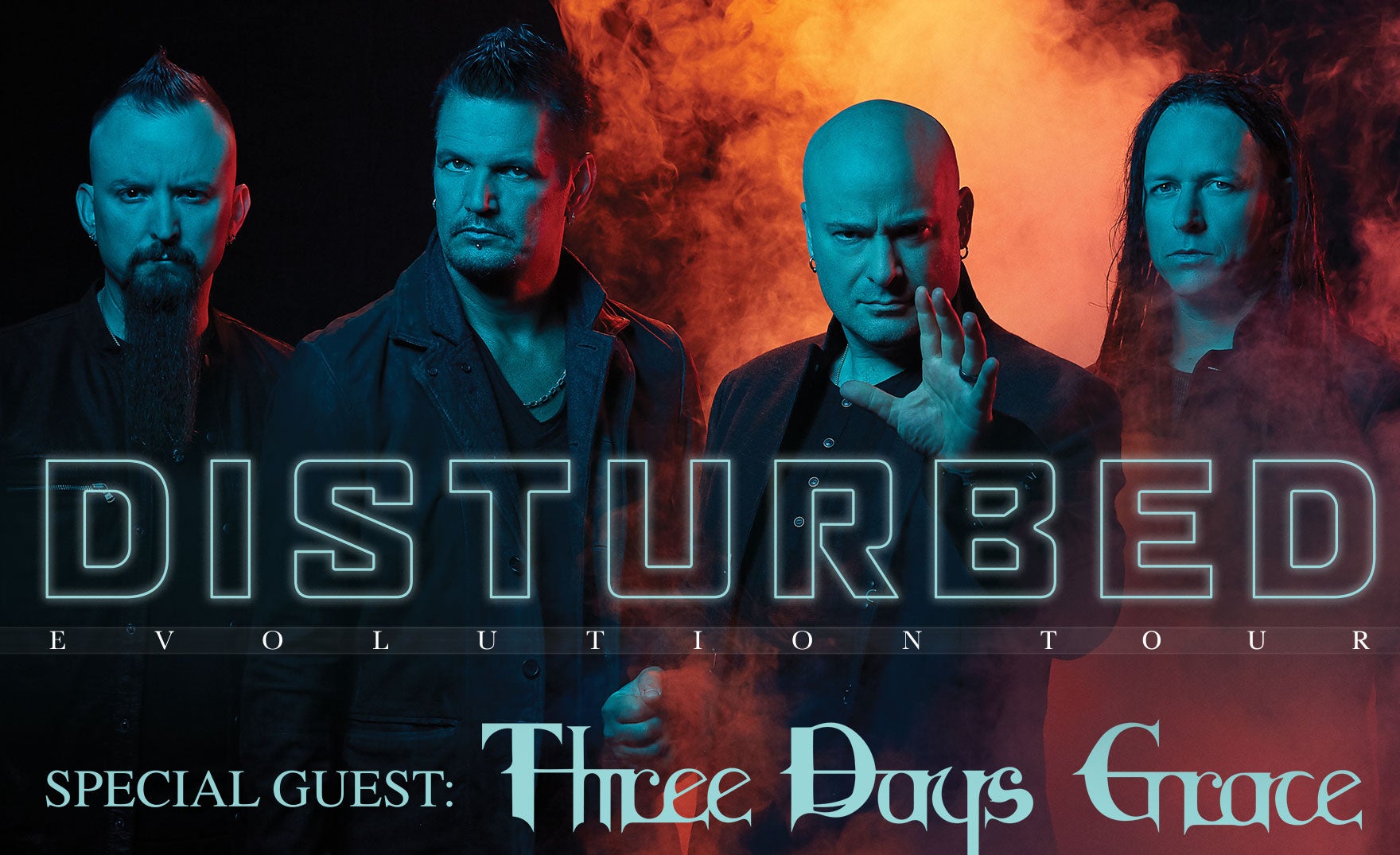 TICKETS ON SALE FRIDAY,OCTOBER 26 AT 10AM

BAND TOURING IN SUPPORT OF NEW ALBUM EVOLUTION – OUT TOMORROW!

HIT SINGLE “ARE YOU READY” IS NO. 1 ON BILLBOARD ROCK CHART FOR 4TH STRAIGHT WEEK

That run will be followed by an overseas trek that’ll see the band bringing their incendiary live show to Spain, Switzerland, Italy, Austria, Germany, Luxembourg, Sweden, Norway, Denmark, France, the Netherlands and the UK.

Disturbed (vocalist David Draiman, guitarist Dan Donegan, drummer Mike Wengren and bassist John Moyer) is touring in support of much-buzzed-about new album Evolution—which arrives tomorrow(!)—and lead single “Are You Ready,” which hit No. 1 on Billboard’s Hot Mainstream Rock Tracks Chart and has maintained that position for 4 consecutive weeks. The song, which is the band’s 12th No. 1 single and the fastest chart-climber of their career, has over 5 million Spotify streams and a companion video with more than 5 million YouTube views.

Evolution has been early drawing rave reviews from fans and critics alike, with Billboard declaring it, “their most diverse album ever and one of their best, on par with their 2002 hit album Believe.” Classic Rock wrote, “the title says it all…the band have embraced their own instincts, and as a result their credibility has soared on arguably their most convincing album since 2000’s The Sickness.” The Chicago Sun-Times said, “Evolution takes some of the biggest leaps of Disturbed’s career, with the unpredictability in David Draiman’s vocals, Mike Wengren’s drumming patterns, Dan Donegan’s dimensional guitar work and John Moyer’s low-down bass lines fully embodying the album’s title.” Music Week proclaimed, “Disturbed are ready to go stratospheric on their new album Evolution,” Metal Hammer wrote, “without a doubt the most diverse record in Disturbed’s catalogue,” and Power Play gave it a 10-star review, gushing, “Disturbed have evolved into a superbly mature rock act, who, with this album, fully transcend from pure metal into pure greatness. This is a career-defining release. Nothing less.”

The Evolution World Tour will see the band playing an exhilarating mix of classic hits like “Down With The Sickness,” Inside The Fire” and “The Sound Of Silence” along with new tracks such as “Are You Ready” and the recently released “A Reason To Fight.”

The tour announcement follows last week’sintimate hometown show at Chicago’s Vic Theatre (a special performance that airs today on SiriusXM’s Octane and Turbo Channels) and this past weekend’s set at the Austin City Limits Music Festival on a bill that featured Metallica, Lil Wayne, Justice and more.

On October 23 and 24, Disturbed will partner with the USO to perform for the Airmen at Creech and Nellis Air Force Bases in Indian Springs and Las Vegas, respectively.

In addition to the performances, the band will take part in USO morale engagements to visit Airmen where they work and learn more about the important missions at each base.

Simply put, DISTURBED are one of the most successful rock bands in modern history.The multiplatinum-selling quartet accomplished the rare feat of achieving five consecutive number one debuts on the Billboard Top 200. That accolade historically elevated them to rarified air alongside Metallica, the only other hard rock group to do so in the history of the chart.  Immortalized (2015) received a platinum certification and spawned the triple-platinum crossover smash “The Sound of Silence,” which garnered a nomination at the 2017 GRAMMY® Awards in the category of “Best Rock Performance.” Since their formation in 1996, the band has sold 16 million albums globally and scored twelve No. 1 singles at Active Rock Radio. Their quadruple-platinum 2000 debut, The Sickness, formally announced their arrival as hard rock leaders, with that status solidified by subsequent GRAMMY® Award nominations as well as gold-, platinum- and double platinum-certified records, as well as countless sold-out shows around the globe.  Named “Best Rock Artist” during the 2017 iHeartRadioMusic Awards, Disturbedcontinue to boldly forge ahead with the release of their aptly titled seventh offering, Evolution.