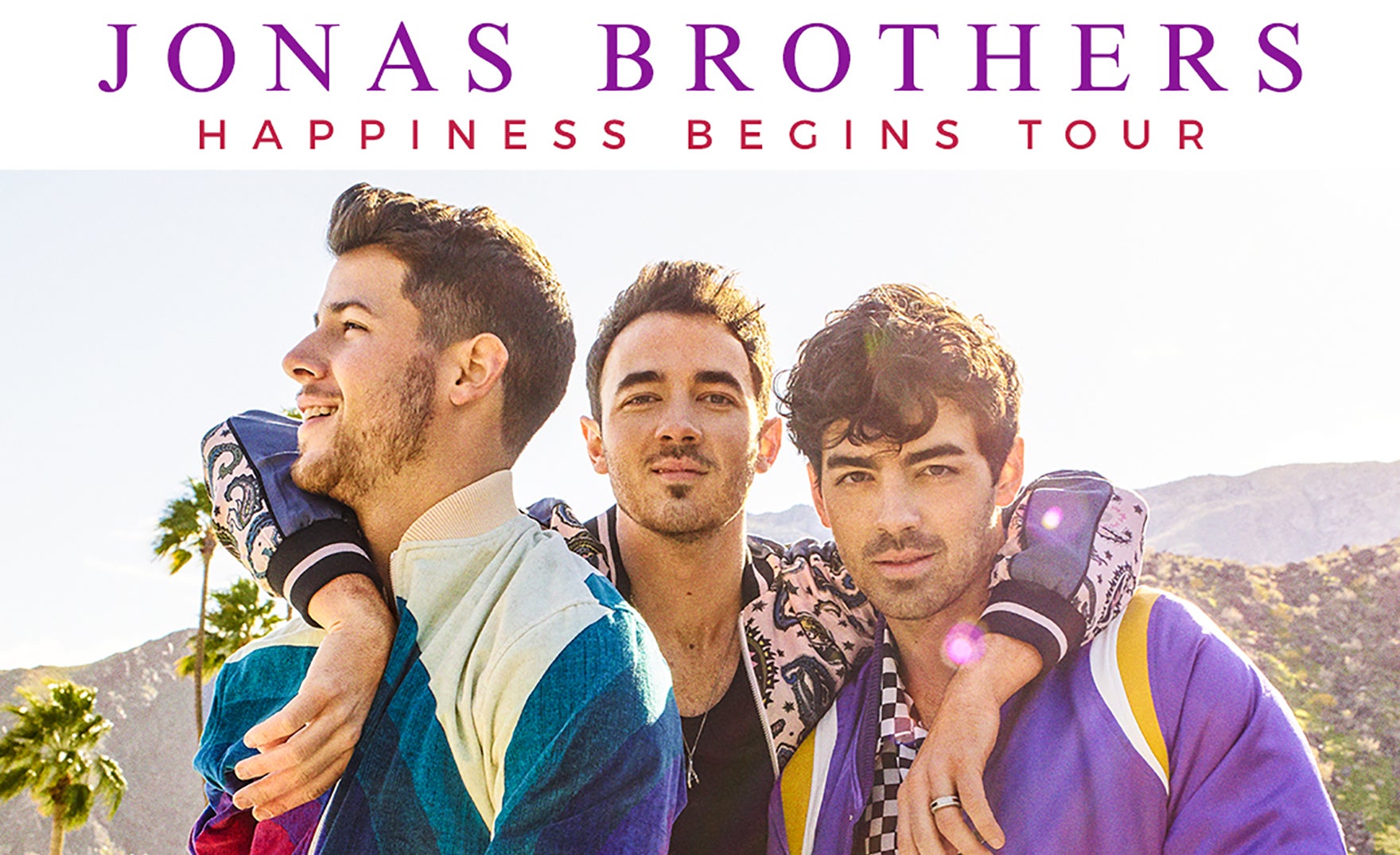 NEW YORK, NY (May 1, 2019) — After building overwhelming anticipation, GRAMMY® nominated multiplatinum powerhouse trio–Jonas Brothers—announce the details for their 40-city Happiness Begins Tour this summer and fall with special guests Bebe Rexha and Jordan McGraw. The announcement coincides with the launch of the pre-order for the band’s highly anticipated comeback album Happiness Begins, as well as the launch of their official merch store online today.
Produced by Live Nation, the “Happiness Begins Tour Presented by American Airlines and Mastercard” kicks off August 7th in Miami, FL and will make stops in Atlanta, Boston, New York, Chicago, Dallas and more before wrapping October 20th in Los Angeles, CA at the famous Hollywood Bowl. This marks the first headline tour for the Jonas Brothers in almost a decade.
Kevin, Joe and Nick Jonas celebrate their return to Pittsburgh for the “Happiness Begins Tour” with an iconic Pittsburgh brand that brings happiness to so many… The Eat’n Park Smiley Cookie– Jonas Style! This exclusive design is not available for sale, but you can catch the real Jonas Brothers at PPG Paints Arena on September 3rd!
Pre-order Happiness Begins (Republic Records) HERE. For exclusive items from the newly launched official merchandise store visit HERE.
American Airlines AAdvantage® Mastercard® credit card holders will be among the first to have access to tickets through an exclusive pre-sale beginning on Tuesday, May 7th at 10am local time. Cardholders will also have the chance to purchase the ultimate Jonas Brothers experience—from the best seats in the house, to early access and exclusive premiums. Cardholders may also get the unexpected, because when you use your Mastercard, you never know when you might get a Priceless Surprise. Tickets go on sale to the general public beginning Friday, May 10th at LiveNation.com.
“We’re so excited to announce this tour and get in front of our fans again! To kick things off we’ve partnered with American Airlines and Mastercard to offer their cardholders special access and experiences throughout our tour. We can’t wait for everyone to see what we have planned!” – Jonas Brothers
The Jonas Brothers have also partnered with Ticketmaster’s Verified Fan platform to ensure tickets get in to the hands of their fans, not scalpers or bots. Fans can register now through Monday, May 6th at 10pm ET HERE for the Verified Fan presale. Registered fans who receive a code will have access to purchase tickets before the general public from Wednesday, May 8th at 10am local time through Thursday, May 9th at 10pm local time. Additionally, TIDAL subscribers will also have access to an exclusive presale beginning Thursday, May 10th at 10am local time through 10pm local time. TIDAL members can find details for purchasing tickets on TIDAL.com/JonasBrothers or via the TIDAL mobile, web and desktop apps.
Jonas Brothers VIP packages will be available & sold exclusively through HOST VIP. VIP package details will be announced on Friday, May 3rd prior to all ticketing pre-sales. VIP packages will be available for purchase on May 10th. A limited number of LaneOne Premium Packages will also be available, including amazing seats in first 5 rows, GA First On Floor, B-Stage VIP Bar area, transportation, preferred entrance and more. Check LaneOne for details.
The Happiness Begins pre-order will include instant grat downloads of the band’s hit singles “Sucker” and “Cool,” produced by GRAMMY® Award-winning songwriter, producer, and lead singer of the multi-platinum band OneRepublic, Ryan Tedder. The third instant grat titled “Only Human,” produced by GRAMMY® Award-winning producer Shellback, will follow. Not only will this be the group’s first album since 2009, but it stands out as one of 2019’s most anticipated records.
These announcements set the stage for the boys to light up the Billboard Music Awards tonight with what promises to be a blockbuster performance. The band is expected to perform their first #1 hit at Top 40 radio “Sucker,” which has just clenched its second consecutive week at #1. Be sure to tune in to NBC at 8:00pm ET. Next up, you can catch them on Saturday Night Live on May 11.
“Sucker” now exceeds 445 million global streams to date. During release week, it clinched #1 on Apple Music, #1 on Spotify, and #1 on iTunes in North America. Globally, it reached #1 on Apple Music, #1 on YouTube, #1 on Twitter, and #2 on Spotify, as well as the #1 Streaming Song and #1 Digital Song. Speaking of making history, the rollout of “Sucker” marked “the first time a band debuted at #1 on the Billboard Hot 100 chart this century.” Continuing the runaway success, “Cool” has notched 70 million global streams and soared to #1 on iTunes Overall Top Songs Chart and Top Music Videos Chart.