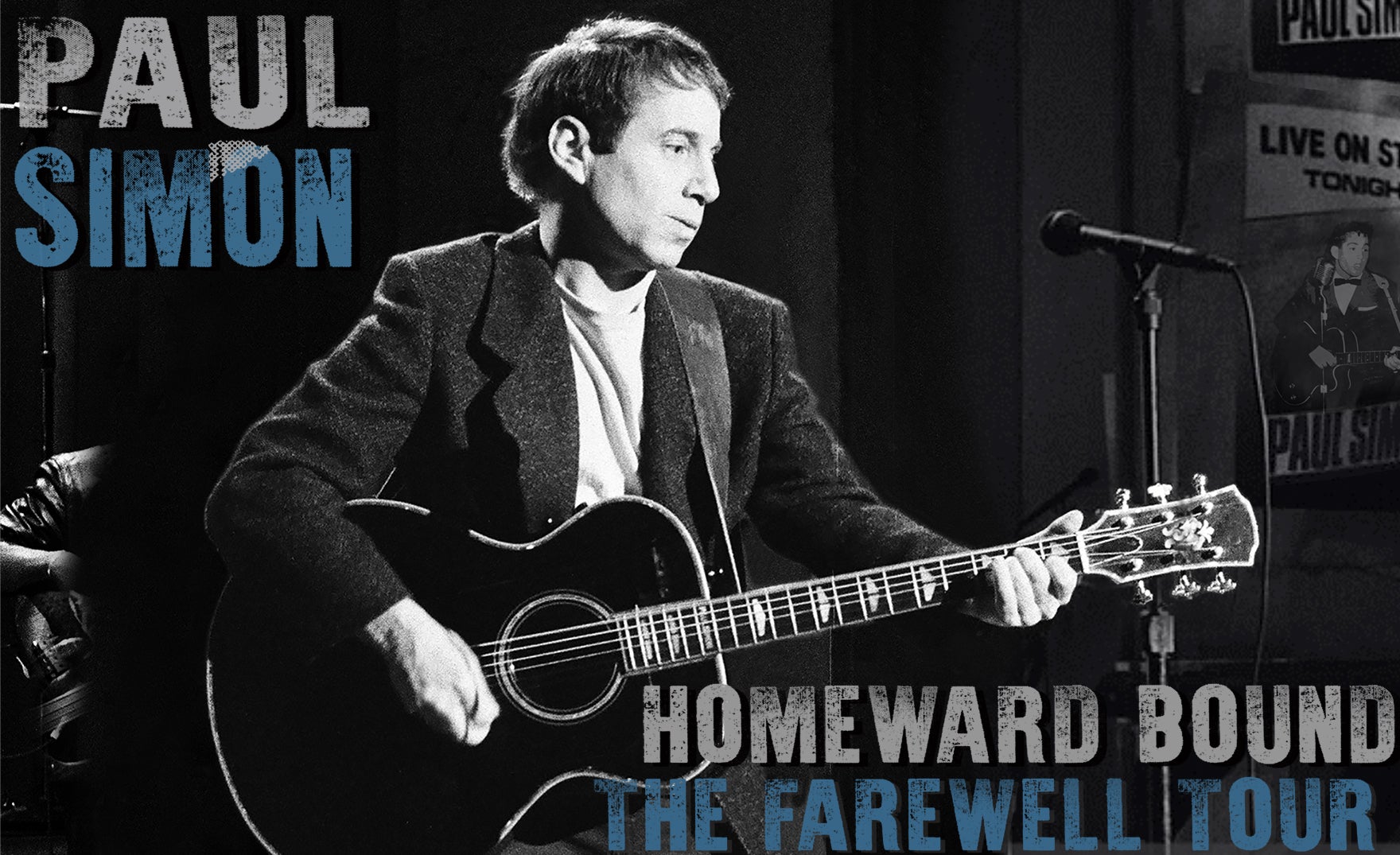 Legendary songwriter, recording artist and performer Paul Simon has announced the final leg of Homeward Bound – The Farewell Tour, culminating with four shows in the New York City area: the Prudential Center on September 15 in Newark, NJ (the city where Simon was born), and two nights at Madison Square Garden on September 20 and 21, with an additional concert to be announced soon. As previously announced, Simon and his band will embark on the artist’s final tour May 16 in Vancouver, bringing to the stage a stunning, career-spanning repertoire of timeless hits and classic songs.
Tickets for the third and final leg of Paul Simon’s Homeward Bound – The Farewell Tour will go on public sale beginning Friday, March 16 @ 10am ET.

The complete tour itinerary is listed below. Go to PaulSimon.com (http://paulsimon.com) for ticketing information as it becomes available.
According to Simon, the Homeward Bound tour is a fitting culmination of a performing career that began in the early 1960s and has coincided with his artistic journey as a songwriter and recording artist until the present day.
He said of this farewell tour, “I’ve often wondered what it would feel like to reach the point where I'd consider bringing my performing career to a natural end. Now I know: it feels a little unsettling, a touch exhilarating and something of a relief. I love making music, my voice is still strong, and my band is a tight, extraordinary group of gifted musicians. I think about music constantly. I am very grateful for a fulfilling career and, of course, most of all to the audiences who heard something in my music that touched their hearts.”
Having created a distinctive and beloved body of work that includes 13 studio albums, plus five studio albums as half of Simon & Garfunkel, Paul Simon is the recipient of 16 Grammy Awards, three of which—Bridge over Troubled Water, Still Crazy after All These Years, and Graceland—were Album of the Year honorees. In 2003, he received a Grammy Lifetime Achievement Award for his work in Simon & Garfunkel, and has sold more than 100 million records worldwide.
During his unparalleled career, Simon has achieved 29 Top 40 singles in the U.S. alone, with 14 of those reaching the Top 10 or higher, including “50 Ways to Leave Your Lover” (which reached #1), “Kodachrome,” “Loves Me Like A Rock,” “Mother and Child Reunion,” “Late In The Evening,” “You Can Call Me Al” and many others. With Simon & Garfunkel, he wrote and performed the #1 singles, “The Sound of Silence,” “Mrs. Robinson,” “Bridge Over Troubled Water,” and numerous other timeless hits.
Paul Simon is a member of the Songwriters Hall of Fame and has been inducted into the Rock ‘n’ Roll Hall of Fame, both as a member of Simon & Garfunkel and as a solo artist. Simon was a recipient of the Kennedy Center Honors in 2002 and was named one of Time magazine’s “100 People Who Shape Our World” in 2006. In 2007, Simon was awarded the inaugural Library of Congress Gershwin Prize for Popular Song, which recognizes the profound and positive effect of popular music on the world’s culture. He was elected to the American Academy of Arts and Sciences in 2011. And in 2012, he was named the recipient of the prestigious Polar Music Prize along with classical cellist Yo-Yo Ma.
Simon’s philanthropic work includes the co-founding of the Children’s Health Fund (CHF), which donates and staffs 53 mobile medical units that bring health care to low-income children and their families in urban and rural locations around the United States. Since its inception in 1987, CHF has provided more than 3 million doctor/patient visits.
Throughout his career, Simon has also raised millions of dollars for worthy causes as varied as Autism Speaks, The Nature Conservancy, CURE, Tibet House and the E.O. Wilson Biodiversity Foundation’s Half-Earth Project, which is committed to stopping the species extinction crisis by conserving half the planet’s lands and oceans.